Anything is Possible with Persistence

I can still clearly remember the day my daughter Alannah called me from college to tell me she had found a homeless dog. Her school was over 1000 miles away. She was living in a no-pets-allowed apartment. So this newly rescued dog would not be possible for her to keep. I knew where she was going with this, and I wanted no part of it. She went on to tell me how scared and frail this dog was, and how it needed a home, and she just couldn’t bear the thought of it living on the street any longer.

Shortly after that call, my daughter was scheduled to come home for a visit. And he arrived on the doorstep with her. I was adamantly against having another dog in my life, or even as a visitor, for that matter. Upon his arrival, I noticed he was extremely skinny, undernourished, frightened, aggressive, and he wanted no part of any of us, either. He was the most tragic animal I had ever seen.

So up he went to my daughter’s bedroom. And she assured me that she would take him back with her and try to find him a home. Initially he didn’t get along with any of our other dogs, and I was afraid to have him left alone with any of them. He was pretty aggressive for such a young and frail dog. When it came time to feed him, he couldn’t even eat if there was another dog in sight of him. I fed my other dogs at one end of the house and took his food to a private corner on the other end so he could eat in solitude.

I knew he had my heart the day he came to my bedside when I was sick, looked me straight in the eye, and wagged his little tail. I also knew at that moment that he wasn’t going back to California, and that I would need to find a way to build his confidence, help him relieve his anxiety, and socialize him with my other pets. I named him Bam Bam. 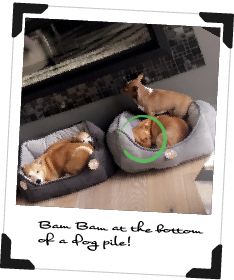 Bam Bam was appreciative of everything. He was grateful for every meal, every time I pet him and spent time with him, and especially when I brought him home new toys. While there have been many bumps along the road with Bam Bam, there has been much more joy. I remember the first time I took him to the vet. He was so frightened; the vet even told me that most street dogs never recover from their early trauma. After that discussion, I was even more determined to save Bam Bam.

I remember the first time someone came to my house. Bam Bam went and hid in a corner. He wouldn’t come out. But just as I tell agents to persist in their business, I knew I had to persist with Bam Bam. I have learned in my life and in my business that there is no greater virtue than persistence. 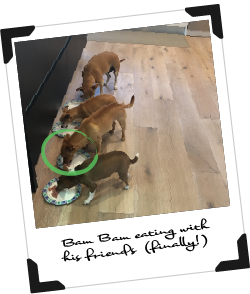 I persisted when feeding Bam Bam by moving his bowl one or two inches closer to the other dogs until finally Bam Bam can now eat alongside the other dogs. When he first arrived, he couldn’t sit near the other dogs. He was truly traumatized. Today, his bed sits right next to his canine brothers and sisters. Bam Bam has proven to me again that persistence and consistency can overcome many obstacles. Bam Bam has taught me a lot.

When talking to agents, I always ask myself if the problem they are having at that moment in their business is solvable with a little persistence and a lot more consistency. Nine times out of ten, the answer is yes, it is solvable. So the next time you find yourself wondering where you went wrong in your business, ask yourself if you have been persistent enough or consistent enough.

Tags: consistency, dogs, persistence, problem solving, problems, work ethic
« The Changing Face of Real Estate: Who’s Buying and What Are They Buying?
Ask Denise: Doing Business with Family »
You can leave a response, or trackback from your own site.