Know Your Market: A Telling Look Back! 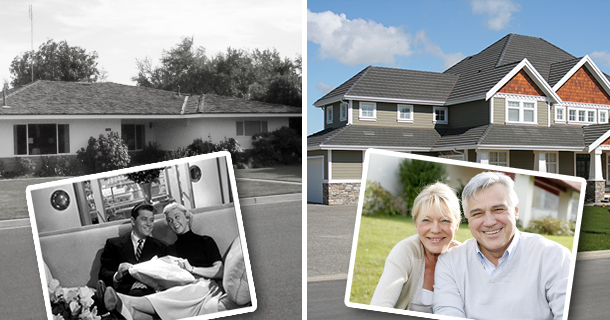 A lot has changed over the past two decades in the housing industry. The makeup of buyers, tenants, as well as household formation has all changed dramatically. Here are some changes that are worth noting and keeping track of as time goes on.

MEDIAN AGE AT FIRST MARRIAGE– There are many reasons people choose to buy or rent. Age and family formation are two of the biggest variables when determining how to live. According to the 2013 Census the estimated median age of a man at first marriage is 29 while the median age of a female is 26. Compare this to the 1950’s when the median age was 21 years old for women and 23 years old for men. This is a substantial increase in a relatively short period of time. Marriage is often a stimulus for buying a home and because couples are getting married later in life the percentage of homeownership in that age group has shifted.

GRANDPARENTS CARING FOR GRANDCHILDREN– The percentage of grandchildren living with grandparents has dramatically increased over the past eight years. The increase directly correlates with the financial economic downturn that began in 2005. This also affected the housing needs of the grandparent caring for the child because they require a larger home or additional space. 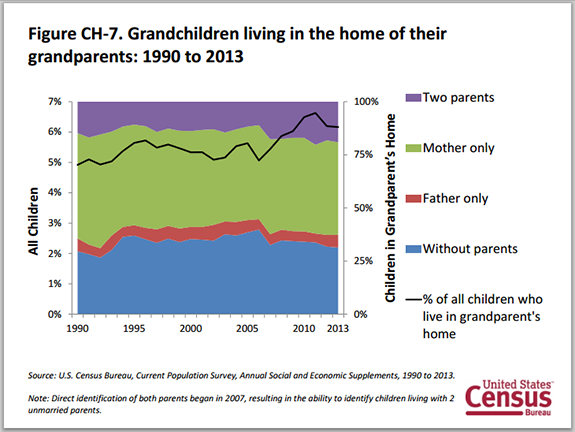 AVERAGE HOUSEHOLD SIZE 1940 to 2013 – The average family household size has decreased steadily since 1940. This dramatic change in the makeup of our households is having a strong effect on the type of housing we need. The smaller the household the less space is required. Many homes are too large for the average households while other homes are not the right floor plan. These changes in the average household size is changing the needs of the housing industry, requiring smaller households, under 2000 square feet. There may be a niche market opportunity focusing on homes that are under this square footage if you have buyers looking for this product and it is hard to come by in your area.

HOUSEHOLDS BY TYPES from 1940 to 2013 – The average household type has changed significantly since 1940. The number of married couple households has decreased significantly while nonfamily (unmarried people living together) households have been on the rise. These changes have happened gradually but steadily. Widows and divorcees may be in a position of having a financial penalty if they remarry and are therefore may be moving in with a new partner or even purchasing a home together without getting married.

HOUSEHOLDS BY AGE 1960 to 2013 –The median age of householder since 1960 has risen, dropped dramatically, and increased again. The number of people owning real estate over the age of 75 has risen slightly (which is not surprising since people are living longer), the number of people owning real estate from ages 65-74 should actually be a bit larger due to the number of Baby Boomers (who are 50-68) but some seniors are putting their homes into a family trust. The 45-64 age group does represent many of the Baby Boomers so it makes sense that this group has grown in terms of household owners market share. However, this age group also has an investment mindset and a percentage of this population owns more than one property. There is one more change to note and that is in the 30-44 age group. This age group is more mistrustful of owning real estate especially given the market challenges over the last few years and therefore are renting more than in the past.

It is clear that the face of housing is in the middle of a transition that requires attention. Knowing how the needs of buyers and sellers is changing is critical to any real estate agent working in today’s rapidly changing market. I suggest you take a look at the factors that are changing in your area to predict upcoming trends. Think about how the demographics in your area is changing, and what buyers need. You might be surprised at how much things are really changing!”

Tags: Denise Lones, housing, housing market, predictions, Real Estate, statistics, zebra report
« Why Not Be Unique, Authentic, and MEMORABLE!
Ask Denise: Smaller Modern Homes »
You can leave a response, or trackback from your own site.