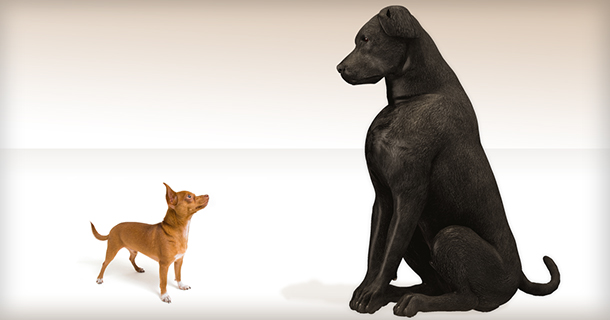 Whether by luck or by chance I have found myself being the proud “mama” of a number of amazing animals over the years. I have had dogs, ducks, horses, goats, deer (yes deer), cats, geese, hamsters and guinea pigs.

In the past few years I have had the thrill of being involved in some pretty wonderful dog training. I will never forget what one of the instructors told me one day about the dogs in our class. He said that he could always tell the runt of the litter because of the “Peanut Principle.” I was immediately intrigued.

He explained that the Peanut Principle referred to dogs that didn’t necessarily have the best natural talent but they made up for it in their work ethic. Hmm… now that seemed interesting to me because I work with people every day that are striving to be the best they can be and I wondered how this applied.

I thought about my own dog, Bella. Bella is about four pounds of spicy, wild craziness and she controls everything and everyone in our home. She is also super sweet, but very, very manipulative.

Bella was the runt of her litter and what she lacks in natural ability (technically too small to boss a large German Shepard around) she makes up for in confidence and attitude. Bella isn’t afraid of anyone but everyone is afraid of Bella. To watch this tiny little animal in action is something to behold. If one of my other larger dogs has a toy she wants she just confidently saunters over gives them her “look” and they just drop the toy. I think they have learned by now that they just can’t win. She is a tiny little dog but she doesn’t know it. Bella has taught me that you don’t have to be the biggest or the best to win, but you do need to have a strong mind set and a work ethic of hard work and determination. When she is determined to get her way not even my dog 25 times her size will get in her way. Bella utilizes the peanut principle and never gives up. If the big dog has something she wants she just digs in, hangs on, and keeps fighting until she wins.

Over the years I have seen the Peanut Principle in action many times over. I have seen agents who lacked natural talent, but were consistent in their follow up or lead generation or client care, and were richly rewarded because of it. For example, I have worked with agents that didn’t have the best natural presentation skills, but they had the desire to be the best. That desire gave them the drive they needed to work hard and to work consistently at improving their presentation. They had to practice, practice, practice and they had to be willing to make changes in their business. And when they did they saw incredible changes in their business.

The Peanut Principle reminded me of an interview I saw with Tiger Woods. The reporter indicated that he was the most talented golfer of all time based on his age and his accomplishments. Tiger quickly corrected the interviewer by telling him that he was not the most talented, but that he couldn’t argue the fact that he may be the hardest working. He then went on to talk about his hard work ethic and his consistency in practicing on an almost daily basis.

So if you ever find yourself feeling “less than” think about the Peanut Principle and how you can apply good, old-fashioned hard work with consistency to change the results you are getting.

I have seen many talented agents fail over the years despite the fact that they were very talented. But rarely does an agent fail when they consistently work hard and have a winning mindset.

A great example of the Peanut Principle took place many years ago when I decided to run a marathon to raise money for cancer patients. I had ABSOLUTELY no natural talent, but I worked hard, and I worked hard consistently, and eventually I crossed that 26.2 mile finishing line. Wow! What an accomplishment! Not bad for the runt of the running litter. Mind over matter, hard work, and consistency can accomplish anything you put your mind to.